Today the planet Mercury moves into retrograde, transiting a portion of the sign Aries over the next three weeks. Mercury is the fastest moving planet of our solar system and the nearest to the sun. He rules over issues of communication, electronics, little details, thoughts and ideas. Mercury is aligned with the astrological signs Gemini and Virgo (My Mercury is in Gemini, my communication style reflects that – I babble about seemingly nothing until I do have a pointed focus that brings me meaning and only then my communication can be laser clear, probably why I did poorly in speech classes in high school and college). All our planets except the Sun and Moon go into retrograde, meaning that from our perspective on Earth they look like they’re moving backwards Therefore, to the ancients who stargazed on the regular it seemed that the planets at one time or another would start going in the wrong direction on their projected trajectory, thus seeming like the world was going crazy until they went direct once more. Mercury Retrogrades are times where communications go wonky, electronics act up, the past resurfaces to inflame and hopefully to heal. It’s not the best time to make a decision, start a new project or sign a contract, but surprising details relating to those can come to the surface to impact them. It’s a great time to retreat and reflect, to face old issues. (Hello, exes! I had resurfacing of one in the last week, and now that I know Mercury was changing directions, it makes sense why he popped back into my life momentarily). 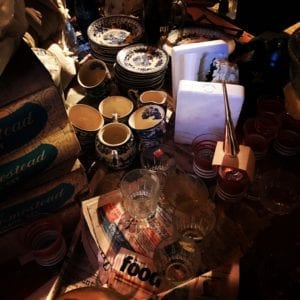 A snippet of 50 years of items and memories

Over the next three weeks, Mercury will be retracing his path from 16 degrees Aries to 4 degrees Aries before going direct once more. Where that portion of your chart lies in Aries will influence how this Mercury Retrograde will play out in your life. My 4 to 16 degrees Aries spans my 8th and 9th Houses. The 8th house is about death and other people’s money, i.e.. inheritances. Which is very fitting for me because I’m starting the long job of going through my parent’s home that they built in 1967 and lived in for the next five decades, raising their children and grandchild. It was 50 years of my dad living there until his passing in September of 2016, followed by my mom less than 11 months later in August of 2017. This is a half century of memories, items and possessions, not only theirs, but now mine and my sister’s. I see it as a chance to say goodbye to them on this plane in another layer, because once that house is sold, the physical connection is gone. I’m not ready to say goodbye to the house now, but I feel once this clearing has taken place, I will be ready.

Where does Aries fall in your chart? Are you feeling the effects of Mercury Retrograde?

A big thank you to The Modern Astrologer for her insight to this Mercury Retrograde in Aries!