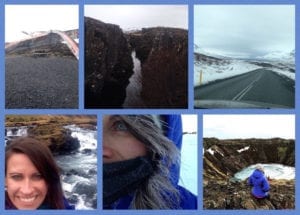 *Disclaimer: This blog entry will cover topics that seem like fiction to some, but it is my own unique experience of the world that is real to me.*

I recently went on the trip of a lifetime. Iceland! This tiny island country as always been on my radar ever since I heard of it as a young girl in grade school. I was amused by the confusion of whomever named it mixed it up with Greenland – for Iceland is green and Greenland is full of ice.

Other than that, I didn’t know much about Iceland, but I had this hungering desire to visit, more of an intuitive urge that I must go to Iceland rather than logical reasoning of “this seems like a nice place to visit based on X, Y and Z”. It just felt right.

It’s a great place to see the Northern Lights and I was mistakenly told that the sun was going into a dormant period for 11 years starting in 2017. Which is true that the sun is going into an expected solar minimum that follows the natural ebbs and flows of life that have been happening for millennia. However the Lights will continue to paint the skies during this solar quiet period, but most likely will be limited to the far northern (and southern) reaches of the earth.

Research informed me about this tiny European country, not really part of the European Union (they applied to join, but later retracted their application, which the EU refuses to acknowledge the withrdrawal), but culturally European. Geographically, it straddles both the North American and Eurasian continental plates. It is closer to New York City than NYC is to the Los Angeles in its own land mass. The island is a mere 16 million years old (for reference, the Earth is 4.5 billion years old and the ancient super continent Pangaea was formed 300 million years ago), entirely formed volcanic eruptions. The Icelandic people are descended from the Viking invaders who claimed the land over a thousand years earlier. They still speak the the language of their ancestors, Old Norse, currently labeled “Icelandic”. And they believe in the mystical entities of the land, such as fairies, elves and trolls.

I put out a call to a group of friends on Facebook to see who wanted to go to Iceland with me. 15 said they were interested, but it dwindled down to 4 of us, perfect for a car ride around the entire country, spending a different night in a town along the coast. It was a whirlwind for sure, but I saw parts of Iceland that I wouldn’t have seen otherwise and the realization that I loved the sparse northern snow-capped landscape far better than the southern.

Scenery that could have been straight from the Lord of the Rings: single peaked vast mountains, running waters of rivers and creeks, ancient glaciers as big as the mountain it straddled, waterfall after waterfall, single lane bridges where we were praying that a reckless, unseen car wouldn’t be speeding from the bend in the opposite direction. There was the obvious lack of trees and the accompanying lack of fresh tree smell, but the smell of the waterfalls made up for it. I had the one magical night with the Northern Lights in Akureyri, a mere 60 kilometers south of the Arctic Circle, where they gave me a personal show of a repeating wave of bright green ball of light along the fainter green streak across the sky. The week went by in a blur with the quiet magic of nature seen everywhere.

At one point we came upon this large object that looked like an outside artistic installation, but we were at the farthest reaches from the capitol of Reykjavik where the population was the smallest. To our shock we found out that it was the remains of a highway that had been destroyed in an eruption 20 years earlier in the 1990s by volcano that stood a mere mile away, and the entire landscape was a sea of black rocks, devoid of of the plant life that had yet to return. Yep, Mother Nature means serious business in Iceland, and this is something that is woven into the fabric of Icelandic life, that the forces of nature enter from above and below, whereas in Chicago, I only worry about it from above in various forms of snow, rain and wind.

My favorite, most powerful moment of my Icelandic adventures was towards the end of the week long journey at Thingvellir, the place where the tetonic plates of North America and Eurasia are separating at the rate that our nails grow. It is the birthplace of the country of Iceland 1,100 years ago and where the capitol met for the next thousand years or so until it was moved to Reykjavik in the 1940s. The landscape composed of mostly of large cracks in the earth, formed by the constantly shifting plates below. Cracks so large that they were practically boulders and cliffs with even more cracks within them. And there was a river of water so clear that ran between the towering cracks, that formed a no-man’s-land that is neither North America or Eurasia. A volcano is currently erupting quietly below, creating a mini-continental plate. This plate hasn’t attached to either major one, so currently it’s considered the Icelandic Plate.

I had the opportunity to be alone during our voyage to Thingvellir due to me taking a bathroom break while everyone explored ahead of me. In the silence of walking along the path through the divides, I noticed this deep hum, and this energetic sense of heaviness throughout my entire being. But the heaviness wasn’t dark for my heart felt light, rather more of an essential grounded vibration that could have been Mother Earth herself. Thingvellir is one of the few places where the crust of the earth is the thinnest. I thought I came for the Northern Lights, but I realized that in this moment, this was the highlight of my trip to Iceland, listening to the quiet hum of the Earth and feeling this deep sense of peace and connectedness.