We Do Not End When We Die 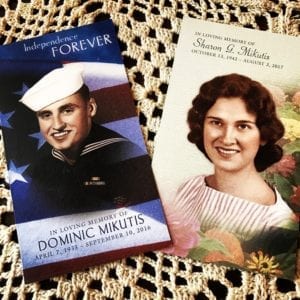 This past year has been quite the ride in loss and creating space. My father passed away suddenly of a heart attack in September of 2016. While he was in his 80s and he’s been gradually slowly down in the last decade and he was in rehab for weakness following a hospital stay, the death was sudden, raw and jarring. He was due to come home on Monday and he passed suddenly on Saturday, just 2 days before he was to get his biggest wish, to be at the home he built with my mom and had lived there for 49 years. But he got the next best thing, he passed quickly with my mom, his wife of 56 years, at his side.

I’ve always been someone who believes in the vastness and interconnectedness of the universe, that matter is neither created nor destroyed. (Which is also confirmed by science in the First Law of Thermodynamics) I believe our essences, our souls are included in this vastness. When I first heard of reincarnation when i was in grade school, it felt so right to me that we have these physical bodies that serve us for a lifetime, but there’s an element of us that is eternal, so why wouldn’t we have multiple lifetimes, wearing different hats from lifetime to lifetime and having experiences that help our souls grow? However, my mom wasn’t a fan of my belief, insisting that the Bible said that we only have one life, and that was that. But I was a kid, who was I to contradict my mom on something so big?

One of my favorite authors is Dr. Brian Weiss of the “Many Lives, Many Masters” fame. But my favorite book is the first one I read, “Messages from the Masters.” The first book, MLMM is focused on showing non-believers and skeptics how a non-believer made his journey to believing that we are all eternal souls that more often than not incarnate in groups from lifetime to lifetime. While I believe it’s a valuable story, its preaching to the choir for I’ve believed steadfastly since I was a young child that we do not end when we die. MftM is a beautiful read of hope and beauty, affirming what I have always believed.

On the morning of September 10, 2016, I was on the bus in Chicago on the way to teaching a Reiki class. I had returned from a whirlwind of a week in San Diego and Sedona for a Reiki retreat and time with a good friend. San Diego, Sedona and Reiki all had given me these electric vibes of expansive happiness and peace and something beyond all that that I just can’t quite put my finger on. Shortly after 9AM, I saw someone’s tattoo on her foot and I had the very clear thought: “you can get your tattoo now.”

I paused. I thought “where did that come from? I don’t even want one now!”

True, I did desperately want one in my 20s and 30s, and thought in the many ways that I’d get one. But my father was born during the Great Depression to Eastern European immigrants with old school ways, such as men do not pierce their ears and tattoos are forbidden. My dad was a force of nature who told me that if I ever got a tattoo, he’d disown me. Looking back, I’m not sure if he actually would have followed through, but he did put the fear of God in me.

It wasn’t until after the class was over at around 5PM that I was told to call my mom and I was told of my dad’s passing from this plane that morning at 9AM. Once the shock of the news settled in, I realized the connection between my random thought about getting a tattoo shortly after 9AM and my dad’s passing. I’d like to think of that as my dad coming to me personally to tell me goodbye in a way that only I could understand.

The following months have been a mix of lows and peaceful moments and adjusting to a new normal without my dad on this plane. And to add on top of this, my mom was diagnosed with lung cancer just 3 months after my dad left and after 8 months of treatment, she passed on August 3rd of 2017.

Before my mom passed, I recently went on a date with a guy who lost his mom around the same time as I lost my dad and he said something to me that really stuck with me. A grief counselor said to him that one of the reasons why it takes a year to get over a death is that you have to experience all 4 seasons without that person, to experience a new normal without that person. When he told me that, I was like “oh crap, what does that mean for me with my dad dying and my mom struggling with cancer and probably dying soon?”

A month after my mom’s dead and a year after my dad’s, I don’t know what it means other than taking a moment to pause, to reflect, to absorb what it means. To take it a day at a time. The grief, the sense of loss, the creating a new normal without my parents, but yet at the same time, having the feeling that we don’t end when we die, just changing form.